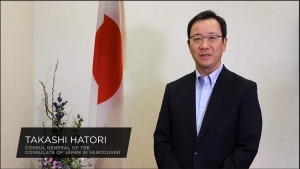 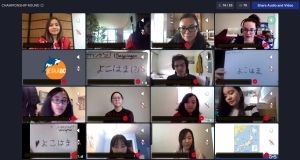 Students answer questions during the championship round, while judges check their answers
On Saturday, March 13, the fourth annual Metro Vancouver Japan Bowl was held online for the first time.

Consul General Hatori delivered the opening remarks. In his speech, he encouraged the students to do their best and thanked JETAABC for their efforts to expand the understanding of Japan and its culture among high school students.

Japan Bowl is a trivia competition aimed at high school students studying Japanese. It tests not only their knowledge of the language, but quizzes them on a range of questions drawn from Japanese history, politics, culture, arts, customs, pop-culture and more. Thirty-eight students on 13 teams from seven schools participated this year.

In addition to the competition portion, students were treated to virtual, Japanese Culture workshops (origami, wagashi and shodou) and musical performances.