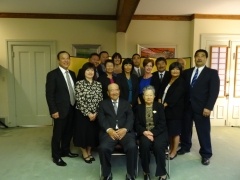 On May 24th, Consul General Okada presented Mr. Toshio Murao with the Consul General’s Commendation, in recognition of his distinguished contributions to the mutual understanding and friendship between Japan and Canada.

The ceremony took place in a friendly atmosphere, after the unveiling of the Nikkei Fishermen’s Legacy plaque at the Gulf of Georgia Cannery in Steveston.  Many people attended the celebration for Mr. Murao.  After the Commendation ceremony, Consul General Okada invited Mr. Murao and his family to a reception.